The Office of H.H. Dorje Chang Buddha III Announcement No. 63

Unsurprisingly, some evil swindlers have taken advantage of the situation and started their ruses. To protect the public from being deceived, the Office of His Holiness Dorje Chang Buddha III hereby announces as follows:

1. All the expenses for this Buddhist event are being paid for exclusively by Dharma King Jinba 金巴法王 and Dharma King Mohe 摩訶法王. The two Dharma Kings did not entrust any organizations or individuals to crowdfund or fundraise. Both Dharma Kings also do not accept any offerings or donations! They will not accept even a single penny!

3. All teachings by Namo Dorje Chang Buddha III are contained in the audio-recorded Dharma Discourses, Dharma manuals, published Sutras, and in the “128 Evil and Erroneous Views.” Some people have taken advantage of the grief and distress of Buddhist disciples to create opportunities for themselves to gain fame and fortune, saying that Namo Dorje Chang Buddha III or Fomu, Holy Mother the Great Mahasattva, privately told them certain things, or instructed them to do certain things; or they say that they want to do something for Namo Dorje Chang Buddha III and Fomu, Holy Mother the Great Mahasattva, and so forth. What those people say is not to be trusted. They are deceiving people! Those are often their ploys to deceive others so as to reap their own benefits. Everyone must be very clear-headed about this. Otherwise, by the time you have been swindled, it will be too late for regret!

4. There is also one person who, for the sake of elevating their own reputation, even claims that when Namo Dorje Chang Buddha III imparted the “xx Sutra” some years ago, His Holiness the Buddha was indicating that He was about to leave this world. This person has the audacity to slander His Holiness Dorje Chang Buddha III and deceive the public for the sake of vaunting themself. They are simply filled with dark karma! Even Great Bodhisattvas would not know about what the Buddha does, how could a sinful ordinary being know? Let’s ask: If you knew when the Buddha would enter parinirvana, then do you know when you will die? We clearly tell everybody that this person does not understand the meaning of Buddha Dharma, and they don’t even have any compassion. They don’t even have the most fundamental goodness, sincerity, or gratitude that a Buddhist would have toward Namo Dorje Chang Buddha III and Fomu, Holy Mother the Great Mahasattva. All this person has is a body full of karmic hindrances. If this kind of person continues to slander and stir up rumors, they will not be permitted to enter the Holy Miracles Temple! Any Buddhist disciples who listen to and believe what such a person says, who also follow this person, will only increase their own dark karma that will foil them from attaining liberation and accomplishment.

6. Only the announcements published by the Office of His Holiness Dorje Chang Buddha III are factual, reliable, and accurate sources of information. 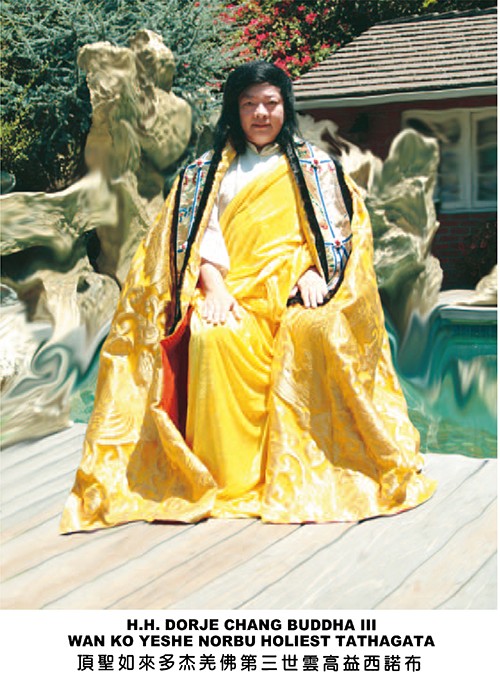